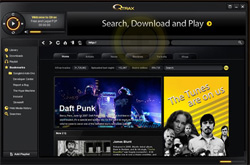 The ‘world’s first free, legal P2P service’ Qtrax has redeemed itself since it ‘launched’ at the end of January, when they failed to deliver music from Universal Music Group, Warner Music, Sony BMG and EMI as promised.

Wired’s Listening Post scored an exclusive scoop on the Service That Embarrassed Itself, and reported that Qtrax has succeeded in signing up EMI, Sony/ATV Music Publishing and TVT Records. Not quite the big four as first claimed, but it’s a good start for what’s essentially a legal BitTorrent.

The files contain DRM, however can be loaded onto PMPs compatible with WMDRM, excluding iPods at this stage.

I’ve been trying all morning to download various tracks from the labels, including TVT which is apparently the only company offering them at this stage, but to no avail. Users are faced with a pop-up box claiming ‘Downloads coming soon!!’ when attempts are made.