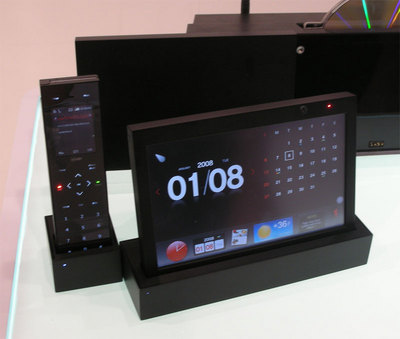 Games consoles, TVs, media centrer PCs – they all have one thing in common. They want TOTAL DOMINANCE of your lounging space. Well so does iriver and it will soon be using its UNIT2 to get it. It’s calling itself an all-in-one multimedia home networking device, which is a lot easier than calling it what it really is: an MP3 / MPEG4 player, SMS messager, video streamer, DVD player, TV viewer, text messaging system instant messenger, portable video chatter, web browser, news reader, emailer and phone.

The main body of it is a (roughly) 7” screen that detaches from the main body – which also hooks up to the TV – holding the speakers, USB ports, SIM card port and various video inputs. You can carry this around your house within a 60 feet range. It is a touchscreen device running a Linux operating system that hooks up to the net, so there’s full web browsing and all manner of widgets to use. I’m guessing it will be a homebrewer’s dream come true. The built-in camera also lets you make video calls and chat to people. Or you can use it watch DVDs or DivX videos and listen to MP3’s streamed straight from the base station.

You don’t have to pick it out of the base unit all the time – if you want to type a text message to a friend then you can pick up the remote / phone thing, flip it open and presto! There’s a full QWERTY keypad. A sexy aluminium QWERTY keypad to boot. 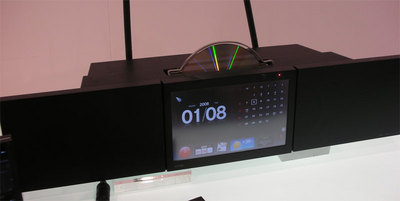 Honestly, it might be the late nights or long hours patrolling the show floor talking, but this was definitely one of the most amazing things on display at this year’s CES. The version pictured above is an LCD one, but I was assured by the exhibitor that there’s an OLED version coming along shortly.

If I had to think of one problem with it, it’s that the video chatting system appears to a proprietary piece of software that’s only going to be really useful if you have a load of friends who also own one. If only it had Skype or something I would be have been forced to grab it off the stand and run like hell.

The best part is, it is definitely coming to the UK. Possibly as early as December, but definitely in 2009. Korea should be getting their hands on it in June/July.