ZCam is a prototype technology from Israeli firm 3DV Systems, which does roughly the same thing as Sony’s EyeToy gaming camera, but with more features. Specifically, it captures depth, rather than just movements to the side.

The effect? You can punch away in a boxing game, and it has an accurate idea of how you’re swinging. You can move your hands, legs, head or fingers in any direction, and they’ll be mirrored on-screen by a character. The video above shows 3DV’s representative demonstrating the boxing, to knockout effect.

However, there’s more to ZCam than just gaming… 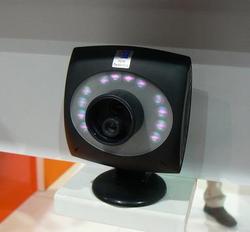 It can also be used to control an avatar on-screen, while the technology is sensitive enough to pick up finger movements, allowing you to control, say, an interactive menu system on your TV by pinching your fingers, or waving them.

3DV is hoping to commercialise the ZCam by the end of this year, and judging by the company’s claims of being NDA’d up to the hilt on its relationships with console manufacturers, we could see it appear as an official peripheral…

CES 2008 Special
Read all our coverage from the show in our CES 2008 category.