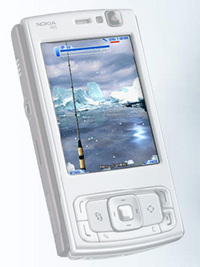 The long-awaited relaunch of Nokia’s N-Gage mobile games platform happens next week, with Nokia announcing that its new N-Gage application will be available for the N81 and N81 8GB handsets next week, with “one or more” games too.

The big difference from N-Gage Mk.1 is that it’s now a platform running across multiple phones rather than one gaming handset – so in 2008, you can expect it to hit other Nseries phones including the N95.

Nokia is seemingly bearing the lessons of the first N-Gage in mind this time round, since it’s a super-soft launch (the application itself is a “pre-release” version, which means ‘beta’ presumably). With dozens of higher quality 3D games lined up for release in the coming months, next week will provide the first indications of whether all-new N-Gage will be a phoenix or a turkey.