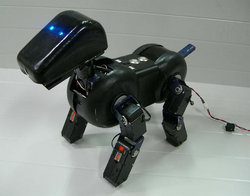 I was sad to see the back of Aibo, Sony’s attempt to replace dogs with a robotic variety. But at £1500 a throw, it was never going to catch on (although that’s still cheaper than a bulldog puppy). But as one robodog departs the market, another one enters – BJ from IXS Japan.

Using software provided, you can program your pooch to run, walk, bite people and drag its behind across the floor. Ok, I’ve made some of those up, but you get the idea. The downside is the price – at around £2500, it’s a bigger outlay than Aibo, but if you want a dog without the poop scooping, it might be worth a shot.

Related postsPC World starts selling robots, brings forward date of mankind’s ultimate destruction
Who thought it was a good idea to give Tasers to the robots?
More footage of the HRP-3 Promet Mk-II waterproof robot