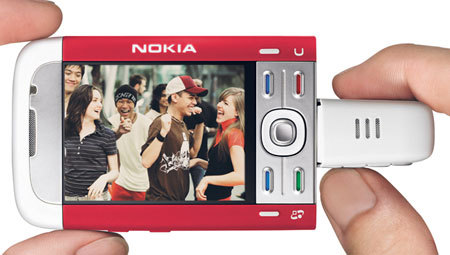 Nokia has announced the arrival of its 5700 XpressMusic 3G smartphone, which benefits from a dedicated audio chip to boost music performance and a twist design for switching between four modes – music player, 2 Megapixel camera, video call and smartphone.

Main storage is via microSD card, with up to 1500 tracks possible on a 2GB card. And once they’re on, you can listen wirelessly via Bluetooth stereo headphones or compatible speakers via Bluetooth streaming. Formats supported include WMA, MP3 and AAC, as well as eAAC+ and MP4. There’s also DRM support and a music player that supports album art and playlists and includes a 5-band equaliser and audio visualisations.

Also included is a colour screen supporting up to 16 million colours, 3G connectivity, video calling, two megapixel camera and all the features of the Symbian S60 operating system. Expect it in a couple of months, priced around 350 Euros, but expect a hefty subsidy if you take out a contract.