True, you could achieve the aim of these cameras through any digital camera and photo-editing software, but lookit! They’re all colourful! And almost retro, I always get a shock whenever I see a store selling disposable cameras, and an unwelcome flashback to family holidays in the early 90s. *Shudder* These cameras from Lomolitos are apparently ‘a true revolution in Lomography’, which, according to Wikipedia, ’emphasizes casual, snapshot photography’, where ‘accidents such as over-saturated colors, lens artifacts, and exposure defects are rehabilitated to produce swirly, abstract effects – a trait emphasized by practitioners’. This would explain why these cameras come with a single colour filter, either red, yellow, green or blue, which can be switched on and off. If you’re wondering what the photos look like using the coloured flash feature, take a peek under the cut for some examples, or pick them up for just €15 each from Colette in Paris, otherwise $10 in the US. 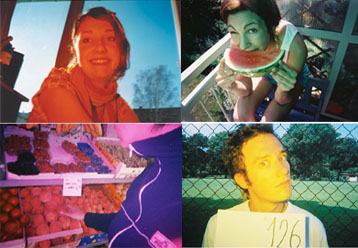