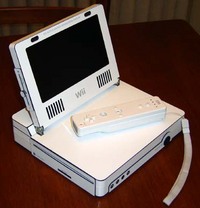 Ok, it wasn’t made by Nintendo, but by those clever folks at Engadget. The laptop features a widescreen 7-inch LCD screen, stereo sound, a GameCube controller port and a built-in short-range sensor bar. Obviously, it’s not for sale.

Check out more on this and just about everything else in the world of the Nintendo Wii over at Wii Wii.