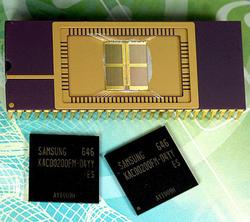 Looks like we’ll all be looking to upgrade our handsets again next year, with Samsung announcing that it expects gadget makers to be using its new ‘fusion’ memory chip (also known as OneDRAM), into handsets, portable games consoles and media players by mid 2007. The benefit? It “sharply increases” data throughput speeds. Or in other words, everything becomes a whole lot faster.

The memory replaces the distinct banks of SRAM and DRAM found in most of today’s mobile devices and allows media and communications processors to share the available memory, dynamically adjusted according to need. That should boost the handset’s processing speed fivefold, claims Samsung.

Other benefits include low power consumption – the memory requires 30 per cent less power than separate DRAM and SRAM memory banks. And with handsets containing fewer chips, that should also mean smaller devices and lower production costs. More on this when the first device comes through.

More mobiles:
LG and Prada partner up for next year’s fashion phone
There’s gold in them there recycled mobiles (sorry)